Usage of Electric Buses in the Transportation Industry in Minnesota

Usage of Electric Buses in the Transportation Industry in Minnesota

There are obvious pros of utilizing electric buses, including:

However, along with the pros, there are bound to be a few cons associated with the usage of electric buses.

By 2023, five Minnesota public transit agencies are expected to have electric buses in their fleet. 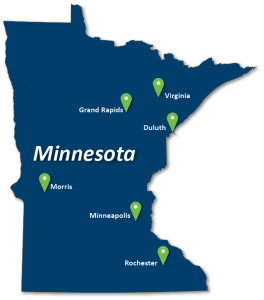 In 2020, the Federal Transit Administration (FTA) awarded the City of Rochester $3,156,746 in funding to purchase electric buses and the charging stations.

In 2021, Arrowhead Transit, the largest rural public transit agency in Minnesota, was awarded funding from the Minnesota Clean Energy Grant to purchase two electric, cutaway vehicles and two charging stations. The buses are in the procurement process, and they expect to have them in operation by mid-2022.

Arrowhead Transit may be the first public transit agency in Minnesota to operate electric cutaway buses. These buses are part of a pilot program to incorporate electric buses into their dial-a-ride fleet. One will run within the city limits of Grand Rapids, and the other in Virginia, where the agency is based. Charging stations will be located at the Grand Rapids terminal and at the maintenance facility in Gilbert.

“We selected these communities to pilot the electric buses because of their higher ridership and proximity to our maintenance facility, should any issues need to be addressed,” said Sandra Wheelecor, a transportation manager for Arrowhead Transit.

The City of Morris will likely be the next agency to operate an electric cutaway bus. According to Beth Heinrich, Transit Supervisor, they were recently notified they were approved for the MnDOT Clean Transportation Pilot Program grant. The City of Morris plans to purchase one electric cutaway bus and two charging stations. It is early in their process, and the delivery date for the bus is not yet determined.

FTA Low or No Emission Program

On June 25, 2021, the FTA announced about $182 million in funding under the Low or No Emission (Low-No) Vehicle Program – 5339(c). The purpose of this competitive program is to provide funding to state and local governmental authorities to purchase zero- and low-emission vehicles and supporting facilities. The FTA’s Technical Assistance section lists best practices and grant writing instruction for the Low-No program. Further, the FTA has a Q&A information page for more information regarding the Low-No program.

The increase in demand for the use of electric buses will continue exponentially over the next several years. It is the goal of several states to have a completely electric fleet of vehicles within the next two decades. Currently, there are only 5 states in the United States that do not have any electric buses in operation. Therefore, the expansion of electric bus usage in the transportation industry will continue to be a hot topic in the industry.

For those who are interested in learning more about the use of zero emission transit buses the Transit Cooperative Research Program (TCRP) published Research Report 219 in February of 2021 titled Guidebook for Deploying Zero-Emission Transit Buses.  The guidebook contains a wealth of research, facts, and information and can be accessed at: http://www.trb.org/Publications/Blurbs/180811.aspx.

This article was published by RLS & Associates.

Login to request a different date or venue for this course — or request a new course entirely.